Famous Diamonds Of The World

There’s something about diamonds that has held people spellbound for centuries.

Personally, I think some of that fascination comes from a diamond’s inherent paradox: that something so gorgeous and decorative could also be incredibly durable and hard. That something so sparkly and glamorous was hewn from the earth itself. Little wonder the most spectacular specimens, the rarest and finest diamonds, have attracted nothing but mystery, death, and intrigue.

The heroine of my debut novel is, like many people, drawn to diamonds and other gemstones. (Although that’s only one part of the reason why she ended up becoming a professional jewel thief…)

With 17 days to book launch, I thought I’d round up just a few of the world’s most famous, and infamous, diamonds. 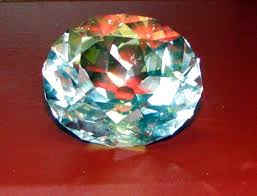 This gem is one of the oldest known diamonds, and has a suitably long and bloody history. Its first authenticated appearance dates back to 1306, and a Hindu text describes the curse it carries: “He who owns this diamond will own the world, but will also know all its misfortunes. Only God, or a woman, can wear it with impunity.”

It is 105.6 carats, finest white, and currently set into the Crown of Queen Elizabeth, on display at the Tower of London. 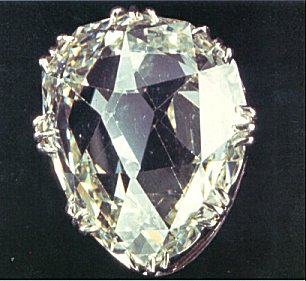 Like the Koh-i-Noor, the Sancy is an old gem that carries many gruesome stories. One of my favorites: in the 16th century, Henry IV sent the diamond with a messenger, for the purpose of securing finances for an army. The stone never reached its destination. The site of the messenger’s disappearance was searched and evidence for a robbery was found–including the body of the poor messenger. When the body was disinterred, the Sancy was found inside the faithful man’s stomach.

The Sancy is a pale yellow diamond of 55.23 carats, cut into a shield shape. It currently resides in Paris, in the Louvre. 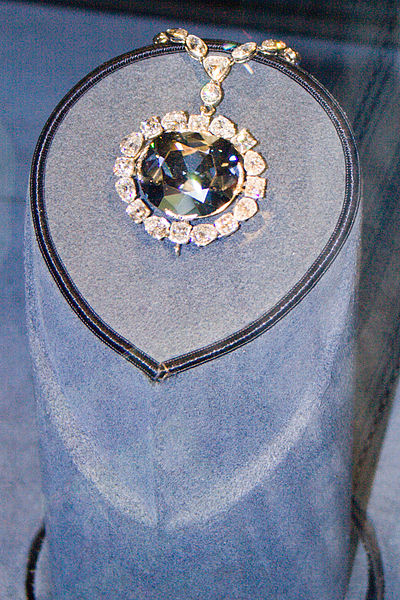 The name of the Hope, and its infamous curse, is familiar to many people. The jewel has a long recorded history and has changed hands many times, with several gaps in the record. At one point it resurfaced, cut down from a larger stone known as The French Blue–its name when it was possessed by its most infamous owner, Marie Antionette.

The Hope is a deep grayish blue color, 45.53 carats, cut into an antique cushion shape. Its current home is the Smithsonian in Washington, DC.

Tell me, have you ever seen any of these diamonds in real life? What do you think accounts for our timeless fascination with diamonds?